Organisers claim that the Bangkok International Auto Salon 2018 is ASEAN’s biggest modified automotive show and sale. And we have no doubt about this after visiting the event grounds located at Hall 2 of Impact Challenger, Muang Thong Thani province. We would have figured out that this event would hold some substance as it is associated with the Tokyo Auto Salon – a 30-year license agreement has been reached to continue showcasing ASEAN’s best aftermarket vehicles.

The 4th to 8th of July were nothing short of exhilarating, hosting more than 600,000 visitors and 140 exhibitors. There were more than 1,000 cars from both local and international firms, all keen to showcase their latest and greatest innovations. The entrance fee was THB100 (approximately SGD$4), but what we received in “exchange” can be considered more valuable and enriching than the input, as we were exposed to unique creations from widebody Lamborghini Aventadors and R35 Nissan GTRs, to race-prepped Ferrari 458s, Mazda RX-7s and Audi R8s in extravagant liveries.

More “relatable” cars were also out in full force, including the latest-gen Suzuki Swift, Honda’s S660, Toyota Fortuner, EK Honda Civic, and Subaru WRX with modifications that go way beyond our wildest imagination. Two-wheeled monsters were also on show, including cafe racers and superbikes – these we reckon stole the limelight, given the strength of Thailand’s biking culture.

And yes, aftermarket exhibitions would not be complete without booth babes, and there were countless in this year’s edition, performing as brand ambassadors with some outshining others with several segments of “sexy” car washes, much to the delight of adoring onlookers. It is rather fascinating to observe how dedicated the booth babes were – most of them were getting well into the “groove” while being conscious about not stepping out of “line”.

We are massive fans of Thailand’s aftermarket car culture – petrolheads are usually on “gung-ho” mode when it comes to modifying their prized possessions, both for performance and aesthetics. We like how hands-on they tend to be too, getting elbows greased and fingers stained to ensure the project performs up to expectations. This was apparent during the car club meets just outside the Impact Challenger hall, with the RX-7 club, WRX club, VTEC club and countless others strutting their projects in front of adoring fans. We highly recommend the visit to next year’s installment of Bangkok International Auto Salon to have a taste of Thailand’s thirst for petrol-infused adrenaline! 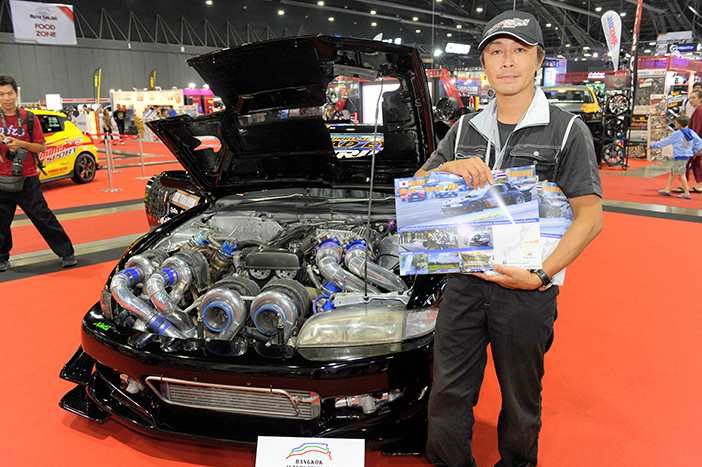